The Dragon Does Not Touch The Native Snake


The time taken from Li Chengfeng breaking out of the vortex to unleash his Three Moons Technique was the same as the blink of an eye!

His opponent had just cried, “YAAH!” and covered himself with sand armour when Li Chengfeng immediately replied with a loud, “BREAK!”

Power from the third strike surged straight through the crack on the armour, pouring into the servant’s body. His armour suddenly exploded off as a gust of Qi shot out of his body like spears and arrows.

Sand shot out in all directions straight at the walls a few meters away, crackling as they hit the surface. It was shocking to see that the sand grains had created dents in the walls.

The crowd watched as the sand armour fell in pieces, shattering into countless grains of sand.

The servant stood motionless, staring at Li Chengfeng. A few moments later, fresh blood slowly dripped from his mouth, nose, eyes and ears. In a trembling voice, he asked, “Who… are you? Why… why didn’t my powers work… on you?”

When he finished, he coughed out a mouthful of blood and collapsed. The other Zhan family servant rushed forward to support him.

The Zhan gentleman gawked in terror, he could not imagine a man as young as him to be able to defeat his servant with mere martial arts, his servant who had weathered countless battles!

People who had no understanding of martial arts would not be able to grasp the gravity of the situation. However, to the ones who understood, it was earth-shattering news!

Little Bell was shocked to the core. “This is impossible! Who… who is this guy? No, I must report this to the boss immediately!”

On the other hand, Liu Sumei gave Li Chengfeng a complex gaze, the corners of her lips curling upwards.

Little Bell shook her shoulders, “Sister disciple, I’m talking to you! Do you hear me?”

Liu Sumei’s mind had wandered off far away, not even noticing that Little Bell had called her by the wrong name. “Huh? What did you say?”

Little Bell’s face was solemn. “Thirteen years… A whole thirteen years! Ever since the Martial Saint Zhang Zhaijun retreated into the mountains, no other martial artist could cross the canyon- to defeat a cultivator with purely his martial skills!”

Liu Sumei looked at Li Chengfeng. “What’s so odd about it?”

Little Bell gasped, “What’s not?! Any martial artist who can defeat a cultivator is often a very important figure with powerful influence!”

“Alright, alright. I understand. I’m supposed to report to the building owner, right?” Liu Sumei shook her head helplessly. With a wave, the bird perched on the stand near her vanity fluttered over and landed on her shoulder.

The bird looked like a crane but only had one leg. It had yellow and red feathers with a white beak, sharp as a hook. It was a mythological Bifang bird. It stood on her shoulder, cocking its head. Liu Sumei caressed its feathers, then whispered by its ear. After a while, she raised her shoulder and in a flurry, the bird extended its wings and flew out through the window, disappearing in an instant. 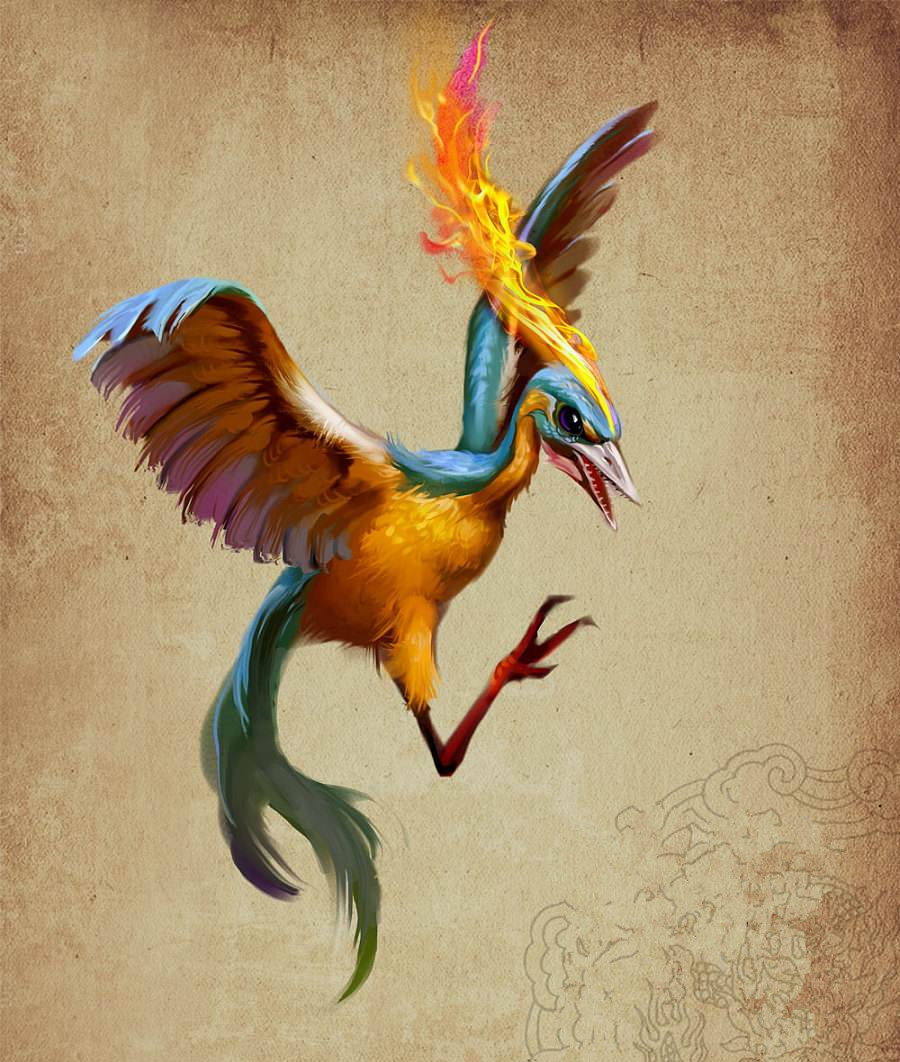 Li Chengfeng’s performance had startled Little Bell, at the same time the Zhan gentleman and his remaining servant.

The remaining middle-aged servant peered at Li Chengfeng cautiously, then his eyes darted at his master. “Fourth Master, the dragon does not touch the native snake…”

Out of sheer terror, the Zhan gentleman let out a peculiar, hoarse shriek, “Let’s go!” He looked deeply at Li Chengfeng, as if to burn the face of the man who humiliated him into his brain, then quickly shot into his luxurious horse carriage. The servant quickly drove it away.

Li Chengfeng heaved a sigh of relief when he saw them leave. If he hadn’t been able to defeat his opponent and scare them, he would have died for sure!

In addition, while Li Chengfeng had practised this technique hard, it was the first time he had used it in a fight against a strong opponent. He also took a few moments to recover from his strike, if the other servant had attacked him after he struck the first servant, that would have been the end of the Li family’s young master.

Cultivators could defeat martial artists so easily because they could restrict or affect their opponent’s behaviour the moment the battle started, then force a distance between them all using their magical powers.

In this scenario, the Zhan family servant could not have backed away because his fourth young master was behind him. All he could do was to lock his opponent’s position or slow down their reaction time so he could strike with his powers.

Li Chengfeng also knew that he only won because his opponent was careless and overconfident that his technique would definitely lock Li Chengfeng up. He did not expect his plan to fail at all.

It was by sheer luck that he won, it might not happen again!

Li Chengfeng calmed himself down. Before he could move, Zhao Xiaobao leapt into his arms and hugged tight, crying, “Young Master!”

Li Chengfeng shoved him away, disgusted, then kicked Zhao Xiaobao’s bottom. “You idiot, all you do is cause trouble! Can’t you just live without trying to get me killed?!”

Zhao Xiaobao fell to his knees, sobbing, “You saved my life! Your wish is my command, Young Master, I will do whatever you need me too without question, you will never even have to pay me one copper.”

Li Chengfeng could not help but laugh. “You’re the one who said it! Not even one copper!”

Zhao Xiaobao wiped his tears, nodding vigorously but after a while, he sobbed again, “But if you don’t pay me a single copper, how will I live?”

Li Chengfeng laughed exasperatedly, “You greedy pig, you’d rather have money over your own life!”

Zhao Xiaobao grinned through his tears. “I learned from you, Young Master.”

Qiu Liansheng regarded Li Chengfeng from head to toe as if they were meeting for the first time. With an expression full of admiration, he said, “Brother, consider me… impressed! To defeat a cultivator as a martial artist, that’s a first in more than a decade! Admirable, admirable!”

Li Chengfeng sighed, his face darkening as he lowered his voice. “I was just lucky he was overconfident in himself! The Crownless King, Champion Marquis, lives up to his reputation indeed. Even his slave was so powerful. The Zhan family is indeed to be feared!”

Qiu Liansheng sighed. “You know that now, don’t you? Think hard about how you’re going to deal with this.”

Li Chengfeng grinned. “What do you mean? Don’t worry, nothing will happen to me.”

Qiu Liansheng asked in surprise, “How are you so sure?”

Li Chengfeng smiled confidently. “His servant called him Fourth Young Master, meaning he’s ranked fourth in the Zhan family, Zhan Qikong. He’s usually within the great northwestern region but his sudden arrival at Cheng’an City only means one thing: he’s here to attend the Spiritual Mountain Sect’s entry ceremony! The selection process will begin soon, he will not cause more trouble after the trauma today.”

Qiu Liansheng smiled bitterly. “That’s even worse! What if he becomes a cultivator? Then haven’t you just made a powerful enemy?”

“You shouldn’t have done that just for a subordinate…” sighed Qiu Liansheng.

Li Chengfeng immediately cut him off with a cold sneer. “No outsider is allowed to bully anyone who belongs to the Li family!”

Qiu Liansheng chuckled. “Brother Chengfeng, I’d like to write a poem for you from what happened today!”

Qiu Liansheng remembered a joke Li Chengfeng had once made and said teasingly, “The grass on my grave grows one-foot-five, all because I’ve got a friend like you!”

[T/L Note: for the love of goodness i could not make this rhyme, but that is the literal translation. Please, readers, you’re welcome to contribute for better phrasing! Based on my interpretation it means i’m going to die because i’ve got a stupid friend like you.]

The surrounding crowd couldn’t help but snicker, all of them looking mockingly at Li Chengfeng. To them, it was a stupid thing to stand up for a servant, against someone this powerful.

Li Chengfeng’s face did not change. He did not stop to think, merely laughed. “I won’t regret it even if I get sent to hell! I’ll turn Hades’ temple upside down if needed!”

Just as he finished, a strum of the guqin came from upstairs. It sounded murderous as Lady Sumei said wistfully, “To turn Hades’ temple upside down! Sigh! Such a man!”

Little Bell leaned her elbow on the windowsill and waved smilingly at Li Chengfeng. With a bright voice, she yelled, “Mister Li, is it alright if my Miss invites you upstairs for a chat?”

Everyone stared jealously at Li Chengfeng. This was the first time Lady Sumei extended an invitation voluntarily. They were all itching to get invited too.

Li Chengfeng smiled. “Lady Sumei just said she was sad thinking about Miss Zhixi, not in the mood to serve us. Coincidentally, I am in the same mood so I won’t be going up either. Please forgive me if I have offended you. I will compensate her the next time we meet!”

He gave Zhao Xiaobao a look and both of them left. Qiu Liansheng stared at him in shock, puzzled why he would let go of such a good opportunity to go upstairs!

Lady Sumei was an absolutely gorgeous woman, she had just publicly extended an invitation to him up to her quarters. This man did not want a living, beautiful woman and would rather pine after a dead woman who had already been buried?

What kind of love-sick man was he?

Liu Sumei’s thin, phoenix-like eyes watched as he left, glittering with tears. She left out a gentle sigh, then plucked the strings again. Little Bell took this as a cue to yell at everyone downstairs below the balcony window. “Hey, isn’t the show over already? We aren’t serving any food you know!”

The crowd was not upset either. They laughed and left.

Li Chengfeng and Zhao Xiaobao had walked out of the building when Xiaobao stared at him with admiration. “Young Master, why didn’t you stay…”

Before he finished, Li Chengfeng’s legs gave out as he grasped for Xiaobao’s shoulders. He leaned his weak body heavily on Xiaobao, smiling bitterly, “I haven’t got any strength left! Quick, help me get home!”

Zhao Xiaobao quickly supported his master, tears welling up. “It’s all my fault, I got you into trouble.”

He scolded Xiaobao, “At least you know that! You idiot!”

Zhao Xiaobao helped Li Cehngfeng walk out, turning the corner into the alley as he said, “Young Master, should we burn some incense and pray? We’ve been too unlucky these days!”

Zhao Xiaobao laughed, supporting his master. There was a long silence until Zhao Xiaobao said in a low voice, “Young Master, thank you.”

Li Chengfeng’s eyes darted at him and scoffed, “Nonsense, didn’t I say already? No one else is allowed to bully you! I’m the only one! They’d have to ask for my permission first!”

Li Chengfeng then said, “If they asked, I would let them! It would be too rude if they did it without asking me first, such disrespect!”

Talk to me on Discord here

next chapter in 24 hours!