To be able to meet this peculiar person again, Chengfeng was elated! He had too many questions for her that needed to be answered. First of all, who was he? And who was she? Why would he have such dreams? Was this once his place? Why did he see so many enemies in his dreams? What happened then?

Countless questions started popping into his mind that he was about to drown in them. However, Chengfeng immediately was on guard once again. What followed after was the feeling of shock. An even bigger question appeared in his mind.

Why was it that he could suddenly meet her? Wasn’t he doing the second challenge on Lingyun Bridge? A test conducted by the Spiritual Mountain Sect?

Nu Yuefei flew to Chengfeng’s arms once again, but this time he was on guard. When she was about to reach him, he immediately dodged, letting her stand by his side as he observed her in high alert.

However, Nu Yuefei once again tried to fly into his arms, and once again, Chengfeng dodged her hug. This time, something peculiar happened, while he avoided her, Chengfeng’s eyes followed her every move. Yet, the second she brushed against his shoulder, she suddenly disappeared entirely.

Before Chengfeng could react, he realised that behind him had turned into what seemed to be an endless stretch of meadows. He quickly turned around to see what had happened, only to discover the swing and back garden had disappeared as well. Li Chengfeng was shocked, he promptly turned back his head once again. Yet this time, all he could see was an enormous army that was tightly packed with soldiers marching towards him from the meadow.

At first, the troops were all mashed together in one formation. Slowly, they started to gradually divide into two troops and began to approach him from both the sky and on land. On the ground, the densely packed soldier lined up in neat square formations, all of them taking each step in unison. They sounded like a gushing torrent, quickly filling up space on the meadow with their massive numbers. In a blink, not even a trace of green could be seen on the field anymore. At first glance, only the dazzling light reflected by the white and silver armour of the soldiers could be seen covering up every inch of the ground.

Whilst above the sea, it was the same. Hundreds of thousands of golden immortals hovered above the sky. They were all equipped with their own magical items, holding them up with ferocity. The sky lit up in all kinds of colours as they yielded all types of magical weapons. They were all glaring at him, ready to pounce and attack when the order was given.

Li Chengfeng stared, his mouth agape in shock and disbelief as this suffocating army started sweeping in. This overpowering pressure and great force had him frightened out of his wits! He stared as he watched the troops march forward. With them was a woman riding a beast that was burning and covered in flames, adorned with giant wings on its sides of what seemed to be a hybrid of a tiger and cow.

Li Chengfeng didn’t know that this beast was one of the immortal realm’s four vicious beasts — *Qiongqi! It was a fierce beast that was a remnant from a great flood invasion 5000 years ago. It is ferocious in nature and has the highest yang energy in the universe, if one’s yang energy was not strong enough, even the most powerful immortals would face difficulty in taming them!

[T/L note: The 穷奇(qiong2 qi2) is an immortal beast in Chinese mythology, I’ve included a picture of it down below to give you a visual image of what it looks like] 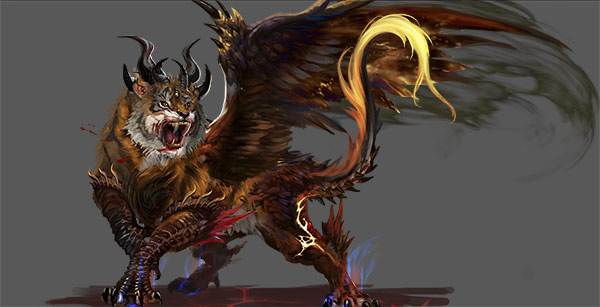 The woman riding this beast wore a long fiery red dress, her eyes looking straight at Chengfeng’s direction. Although her face showed no expression, yet hidden in her eyes was great sadness.

But this sadness appeared for just a second, immediately her gaze turned sharp and determined. As she grasped her empty hand, a long sword appeared out of thin air. This sword was one of the four legendary swords in the immortal realm — The Heavenly River God’s Sword!

She floated up slowly from her seat, having noticed what she meant, Qiongqi stopped in his tracks, lifted his head and gave a deafening roar. Its voice shook the heavens and earth, the legions behind her suddenly halted their tracks.

The woman held up her sword, her body slowly floated. As she stood in front of all the immortals, she slightly parted her lips and roared, “Yu Chengfeng! In accordance to the Emperor’s orders, you must be slain!”

Li Chengfeng froze, could it be… this was the traitorous immortal???

Shocked beyond words, he immediately retreated back to his thoughts. As he was doing so, he unconsciously turned behind him and glanced, only to find that behind him appeared a palace that was floating in mid-air! The palace was tall and majestic, as he lifted his head to see where it ended, he realised the top of the palace shimmered in golden light where the sky should be.

Shrouded in mist, the palace looked as if it was immortal.

Suddenly, a ray of light shone down from the top of the palace and straight to the sky. This beam of light quickly formed into the physique of a man. Although it was a distance away, Yu Chengfeng’s body was as large as the sky. The second he showed himself, the common immortals unconsciously took a step back, their faces filled with respect and fear.

Yu Chengfeng sadly gazed upon the woman in red as she floated in the air. He slowly opened his mouth as his voice shook the heavens, “Xiyan… You shouldn’t have…”

Sun Xiyan’s expression slightly softened, but changed immediately after, her gaze turned back to looking sharp and cold as she shouted, “Yu Chengfeng, you have killed millions of immortals from our realm! Wou have been declared as an enemy to our immortal realm whom we must eradicate! No personal affairs shall interfere with this matter! What’s more, in my generation of immortals, we cut off all attachment and destroy all desires! Just so our future generations can live a long life!”

His booming laughter shook the heavens and earth. It shook the sky and the lands, a hundred thousand soldiers started to sway and fall. The once dignified and grand army was now in shambles.

Sun Xiyan enraged! She exclaimed angrily, “Yu Chengfeng, although your sorcery is unformidable, do you think you can possibly defeat one million immortals?!”

“The immortal realm has died, all immortals shall be eradicated!” laughed Yu Chengfeng angrily.

Filled with rage, Sun Xiyan screamed, “Such nonsense from a demon!” As she glanced back at her troops, she declared, “The existence of the immortal realm lies upon this fight! All immortals, ready your positions! KILL HIM!”

Li Chengfeng stood still as he watched the two parties collide. Watching as countless magical weapons were being used, it felt just like a hurricane, everything was chaotic and all over the place. His face had turned to ash, his body trembled so much that he couldn’t move an inch. All he could do was stand there and be forced to watch the two parties battle with their magical weapons and sorcery as he trembled in fear!

He unconsciously closed his eyes as he shielded his body with his arms, waiting for death to come and collect him. As some time had passed, Chengfeng finally dared to open his eyes slightly. To his surprise, the scenery surrounding him had changed once again! And he was yet back at the back garden from before, with the pretty Nu Yuefei looking at him with a smile.

Li Chengfeng shivered as he thought to himself, ‘What the hell happened just now? Was that a continuation of the dream I had last time? Or is this just an illusion of the heart’s biggest fear?’

He shuddered to the thought as he stared at Yuefei and shouted, “WHERE IS THIS PLACE! WHY DO YOU KEEP APPEARING BEFORE ME?!”

Nu Yuefei stood up, her face scrunched up, looking too pitiful as she whined, “Lord of the Palace, do you not recognise Nunu?”

Chengfeng exclaimed, “Why am I here?! Where is this place!”

The white-robed maiden slowly walked towards him as she softly spoke, “This is the Purple Golden Sun Palace, this is the home of the Lord and Nunu! Does the Lord really not remember?”

Li Chengfeng sneered, “Impossible! I’m currently trying to complete the Spiritual Moon Sect’s challenge on Lingyun Bridge! I can’t possibly be in the Purple Golden Palace right now! If you’re an illusion, please! Go away! Shoo! If you’re a demon, hurry up and show your true form!”

As she said this, the girl in white covered her face with her hands and began to weep.

Li Chengfeng was a man who had a tender heart for fair ladies. Although he was on high alert, as he watched the poor girl weep, he couldn’t help but feel his cold heart soften.

He hesitated but ultimately decided that he should comfort the poor girl. Just as he approached her, he could suddenly hear the girl pitifully say, “Since the Lord had forgotten me, then… DIE!”

Just as her sentence ended, the once beautiful young maiden suddenly morphed into a Grim Stork! It opened it’s bloody mouth wide and directed a piercing screech towards Chengfeng that shook the ground. Its breath reeked of rotten flesh and blood as it charged towards him!

Talk to me on Discord here // Glossary here