Lord Chao Wen’s eyelid had been twitching since this morning. He felt like something was going to happen but could not place a finger on it. However, as the lord, he still put on a calm face despite his restlessness. He went to walk in the garden, admiring the precious flowers planted by his slaves.

The faint fragrance refreshed and calmed him, that was why he liked thinking in the garden.

The restlessness faded greatly after he smelled the familiar scent. However, he did not let his guard down. He was a capable man to be able to keep Chao Qiu City’s peace all these years and he trusted his gut.

So what is it?

Chao Wen hung his head slightly, looking at the green plants in front.

As he thought, he heard an urgent cry.

A young man clad in embroidered clothing rushed over, panting.

Chao Wen furrowed his brows. He had always taught his children to remain calm in face of anything. His children were usually very calm so why was he so agitated today?

“What’s with the shouting?!” Chao Wen did not speak loudly but his tone was stern, displeased with the young man’s behaviour.

This was his eldest son, Chao Chuan, the likeliest heir to the throne. Usually, he did his best to please his father and even imitated his father’s countenance. However, he was too shocked this time to keep his calm. His father’s tone knocked some sense into him.

He paused to take a deep breath, then hurriedly explained, “The guards sent news that there are people coming!”

Since the chaos in the desert, Chao Wen sent out a batch of guards specially to watch Chao Qiu City’s surroundings to report any movements immediately. So far, everything they encountered had just been minor inconveniences.

Chao Wen’s brows trembled. Was this the reason why he had been so unsettled?

“Who are they?” asked Chao Wen.

Seeing Chao Wen frown again, Chao Chuan explained hurriedly, “Although we don’t know who they are, the guards said they… they… they might be from the other side!” He pointed towards the sea.

“From the other side?” gasped Chao Wen. “Tribesmen like the Longboat tribe?”

The Longboat tribe occasionally traded with Chao Qiu City so Chao Wen knew of them. However, all he knew was that the Longboat tribe was just an exception on the other side, rumours told that the tribes there were very weak and Longboat was the strongest.

This was due to the Longboat tribe’s own bragging when they first arrived, plus they had been the only tribe to frequent both sides over such a long period of time. That was why the people here slowly believed the rumours.

Chao Wen knew that due to the war and construction of many cities, the slave masters and aristocrats had started to buy huge quantities of slaves. The small and medium tribes living inland were forced to escape deep into the forest and were difficult to find. When it became difficult to capture slaves, the slave trading organisations set their eyes on the other continent, i.e. the Bi organisation.

This was why Chao Wen always thought the tribes on the other side as people who would soon become slaves, trivial matters. When their marine transportation improved and travelling became easier, Chao Wen also wanted a piece of the pie to capture slaves from the other side and take their ore and salt for himself.

But now there are tribesmen other than Longboat tribe here?

Should they catch them all as slaves?

“How many?” asked Chao Wen, deep in thought.

“HOW MANY?!” Chao Wen cried, enunciating each word in disbelief. “Four to five thousand?!”

Chao Chuan nodded vigorously. “The guards even said… said… they were quite powerful. It didn’t look like a migration, more like… they were moving with intent.”

Chao Chuan’s jaw dropped. He wanted to say something but it was stuck in his throat. His face changed.

This was not a small number.

Four to five thousand people. Not refugees, not migration, mostly strong warriors. All these pointed to one conclusion---they’re going to attack our city!

Chao Wen could not remain calm. Pushing Chao Chuan aside, he sprinted out of the yard like the wind.

Within Chao Qiu city, far travelling traders were busy with their trades. They were used to the local trading practices and could walk through the bustling streets and free trade zones with their eyes closed. They were familiar with activities across the city and gossips within.

Something was different today.

Clack-clack-clack. The gold-plated gates of the lord’s mansion opened and an army of one hundred riding soldiers rushed out. The people in front waved their long-handled weapons mercilessly, shouting for the people in front to make way.

Most people reacted quickly, jumping aside to make way.

“Those are the lord’s own private troops! People of the Chao family!”

“Look at the two people in the centre!”

Within the group that left the lord’s mansion, two people were clad in obviously different clothing, in brighter colours and dressed more exquisitely. They were Chao Wen and Chao Chuan. IN the past, Chao Wen took the carriage but this time, they were in a hurry and rushed out on their horses.

“They’re heading towards the city gates!”

“Why is the lord in such a hurry? What is he doing?”

Anyone who saw the rushing crowd of horses and people would know that something was about to happen.

After rushing to the city gates, Chao Wen climbed up the tower and stared far away. His chest tightened. Although he could see only a black dot far away, he knew that Chao Chuan’s report was true. There were even suspicious figures in the air.

“Close the gates!” After Chao Wen shouted, he readied the archers. The birds in the sky were no ordinary birds.

Outside the city was a trading group who just arrived. Before they could enter, they were locked outside. No matter how they begged and yelled and threatened, the gates were still closed. The lord was personally at the gates, who would dare open them?

Not just the people outside, even the people inside the city were puzzled. Anyone who wanted to leave was stopped.

A crowd approached the gates to watch. If the guards did not stop them, they would have come over to the gates.

“Why are they closing the gates during the day?” someone was upset.

“Yeah, they should have informed us too, if something happened.”

And we would have run as soon as possible, they thought privately.

“It doesn’t look too good. Should we find a way to leave now?”

“Climb the walls? There are guards everywhere now though.”

“We can hide first.”

The complaints and discussion stopped in the next second.

A wolf’s howl came from far away.

There was silence, then the crowd exploded in discussion.

“That was no ordinary wolf, I can tell!”

“We have heard howls like this before but why does this feel so…” The person shuddered.

“A fearsome beast!” said an older traveller with confidence. Their group was from deep in the mountains, they could differentiate between wild and fearsome beasts. Only a fearsome beast could make that sound. An ordinary wolf could not release such a bone-chilling howl and made every muscle tense up.

A few eagles flew past. They circled the city.

“They are too high up, we can’t shoot,” reported an experienced archer. Even if they could shoot, the arros need to be fast enough because the bird could have moved after the arrows were fired. Based on their agility, it was clear that these birds could not be shot down easily.

“That… is also a fearsome beast!”

“What is going on? Is someone attacking the city?”

The crowd had many guesses, their imaginations running like wild horses.

At this moment, Chao Wen stood on the city tower, his brows furrowed so tightly they could break a twig, his eyes fixated ahead.

Chao Chuan had received orders to mobilise the troops while Chao Wen watched the approaching group, trying to guess their identities and formulate a plan.

There were three large flags in front. Chao Wen recognised two flags- one bore the Longboat tribe’s totem, while the other made Chao Wen sigh bitterly.

He recognised the totem because King City had once issued a command to kill Flaming Horn’s migrating party with the totem on the message. Chao Wen since learned more about the tribe.

When King City requested for them to send reinforcements, Chao Wen stalled on purpose. It was not because he wanted to help the Flaming Horns but because he did not like wasting his own troops. King City can fight their own battles, we just need to act like we’re helping.

However, he did not expect to see Flaming Horn’s totem here. So they were indeed from the other side of the ocean!

Other than Flaming Horn and Longboat tribe’s totems, he was not familiar with the third flag. There was a strange picture on it, like a snake. He had not seen it before.

No matter what, his first thought was--- this is bad!

Actually, the flag that Chao Wen could not recognise was a new flag. It was ‘new’ because it was created not long ago.

Before the fleet left, when they were sending messages to each tribe, Shao Xuan suggested designing a flag for the Flaming River Alliance.

Since the alliance did not belong to one tribe and there were many members- likely even more in the future- they could not use any specific tribe’s totem. Even if they wanted to use the Flaming Horn’s totem, every tribe would object to it. The tribesmen were quite stubborn when it came to totem matters. That was why Shao Xuan used a familiar- though foreign to the people here- picture--- a dragon.

The dragon was drawn according to Flaming River’s approximate shape.

The Flaming Horns did not object to Shao Xuan’s decision and thought it was a good idea. The other tribes naturally did not object either. Since it was based on the river, they were fine with it. When Shao Xuan suggested putting each tribe’s totem on the flag in the future, they grew even more excited. However, they took totems seriously and would not put their totems on the flag without a solemn ceremony. Since there was not much time, the flag only contained one Flaming River-shaped dragon.

[T/L Note: the dragon here refers to a chinese dragon, they are long and snake-like, different from european dragons! Source: wiki ] 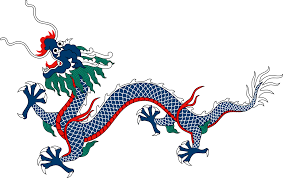 Talk to me on Discord here

Come support me on Patreon here to read chapters in advance!

Support DOGE2 and his work Chronicles of Primordial Wars