My Wife Is a Beautiful CEO - Chapter 544


Only a few people were completely unfamiliar with the god structure and were therefore puzzled when they heard that name. Everyone else, including Prince Sargeras, had all widened their mouths in surprise as their minds went blank.

Apollo alone had made them incredibly anxious, but suddenly, the gorgeous lady in his arms was the goddess of the moon—Artemis?!

If that was the case, the so called ‘disgraceful siblings’ from the Cromwell clan were actually gods?!

Having listened to the formal form of address, the people on the island were basically assured of their identities. However, the two gods didn’t exactly behave like what they would expect gods would.

Gloomily, Yang Chen pretended to cough. “Have you guys consumed hormones recently? Can’t you give it a rest from time to time?”

Alice turned around, revealing her alluring, pinkish face. “Hades, now that everything has essentially ended, bring the cruise Louis XVI over to us, and sink this warship afterward.”

As soon as she finished speaking, the guys in black on the warship from the Realm of Gods were astonished.

Their leader Depney had been exposed, while their current opponents were way out of their league, legitimate gods; it was good enough that they hadn’t peed themselves. They initially thought they’d be ignored as the two gods were making out. Who knew that they had planned for this ship to be submerged?!

Many of the men in black revealed fear on their faces. Having witnessed Apollo’s overwhelming power, they dared not resist at all. There was only one intention in their minds—escape via the lifeboats!

Looking at the messy situation, Alice’s beautiful eyes were filled with nothing but indifference. As her bright silver hair danced in the wind, the ocean surrounding the warship had a sudden change!

More than a hundred meters away the warship, the ripples on the ocean suddenly froze. As cracks echoed, the sea surface had completely turned into ice!

A surging chill came out of nowhere and with it, fog to surround the warship!

The men in black rushing to the lifeboats clenched their shivering teeth to fight the cold, before their bodies slowly started to shut down! Unable to move, starting from their feet, ice slowed down their movements while the other muscles throughout their bodies were restrained. They even felt their own blood flow stop flowing!

Swiftly, starting from a few degrees celsius, the temperature at the region plummeted to more than negative ten, and it was still going!

Stern had activated a brilliant shield to cover Lin Ruoxi, and Harry and his mother so that they wouldn’t be suffer from the extreme cold.

At this moment, the region outside the shield had all been covered by unbearably cold white ice. After the entire ship and all the men were frozen, as if the whole moment was in pause, there wasn’t any sign of movement left.

Standing in front of the monitor, Sauron, Abbess Yun Miao, Fodessa and the rest witnessed the hundred-meter-long warship and the surrounding sea water getting frozen in a matter of seconds. To their surprise, the combined scene formed an enormous ice sculpture!

Ordinary ice powerusers could freeze stuff, but the magnificent act done within seconds had far exceeded their imagination!

When everyone looked at the silver-haired, charming lady once more, their gazes were now filled with intense terror!

“Doesn’t the goddess of the moon and hunt, Artemis, have a bow divine weapon like Apollo? Why has she chosen to use her ice powers instead? This looks more like a superpower.” asked the extremely knowledgeable Prince Sargeras as he looked at Yang Chen.

Yang Chen waved his hand with a smile. “There isn’t an ice goddess among the gods. As the night is cold, just like the day is warm, Diana, which is another Roman name of Artemis, is able to control ice. I wasn’t aware of it myself back then. But I guess since Apollo represents the sun, and could control the fire god’s blaze, it’s not surprising for Artemis to use ice.

“Actually, what kind of power it is doesn’t mean much. At the end of the day, the difference just lies in how they are used; the objective is the same.”

Sargeras nodded like he understood it. “That’s right. I have indeed cared too much about the form of different powers. To you gods, whether it is blaze or ice really isn’t any different anymore. They’re both elements within spacetime.”

Dissatisfied, Alice who had completed the ‘freezing project’ humphed. “I indeed have a bow called Selene, but I have lost it after my latest rebirth when I fought with the crazy woman Athena. The person hiding it better stay in hiding because i’m going to kill them if I see them!”

Stern passed her chest and said, “Dear, don’t worry. After you retrieve Selene, I’ll help you deal with Athena together. I guess it’s about time that Athena awakens as well. This time, we’ll fight her together to avenge you!”

“Forget about it. When the despicable woman fought me, she didn’t use any divine weapons. We’ll still lose even if you’re in the equation,” said Alice helplessly.

Stern smiled awkwardly and rubbed his nose in silence.

The people on the island were all clueless about their conversation. Yang Chen, however, hypothesized that Artemis, just like Ares back then, had looked for Athena to fight for the God’s Stone. However, the woman was indeed a force to be reckoned with even amongst the gods.

It wasn’t surprising for Christen to think that only Zeus could rival Athena. So it was because, other than Ares, the other gods had fought her before.

Wait! Athena?! Yang Chen suddenly thought. Is it possible for her to be the mysterious person who has snatched the God’s Stone and extracted the divine power within Holy Grail?

However, he soon dismissed the thought. If it was really Athena, she wouldn’t have done it so secretively. Back then, she managed to possess the God’s Stone in the end, but it ended up on the previous Pluto’s hands when she was going through rebirth.

Had she been awakened, she was definitely capable enough to snatch it from Yang Chen. He was only as strong as Ares after all; if he was faced with Athena, his resistance would absolutely be futile. Why wouldn’t she show herself, but hide in a seemingly afraid manner instead? She was none other than the goddess of war who didn’t fear even Zeus!

Furthermore, while it was logical for Athena to grab the God’s Stone, why would she extract the divine power left by ordinary gods as well? Now that just didn’t make any sense!

No matter how hard Yang Chen tried to think, he wasn’t able to determine the identity of the mysterious person.

Yang Chen even had the urge to try and contact someone from Hongmeng. The people who have exceeded the world of norms might know something he didn’t.

As he recalled Hongmeng and its existence, Yang Chen thought of another possibility. Could it be someone from Hongmeng? Or is it someone of their level from some group unknown to me?

There were too many things in Yang Chen’s mind. Suddenly, Yang Chen felt that his vision turned dark!

Yang Chen staggered backward and almost fell on the ground. He clenched his head with both his heads, gripping his scalp tightly before barely standing straight again!

“Your Majesty Pluto! What happened to you?!”

“Is the illness here again?!”

The few people from Zero close to Yang Chen noticed his abnormality and instantly thought of something else, hence their questions.

Yang Chen waved his hand to indicate he was fine. His body shivered while his forehead was filled with cold sweat. Panting, he said, “I—I could’ve killed too often nowadays, and I haven’t been paying attention to my alcohol consumption, so the stimulants might’ve caused me a little headache. But don’t worry, I’m fine.”

Yang Chen dared not raise his head, since he knew that his eyes must be scarlet now.

In his mind, countless insane thoughts surged. The violence overflowing in his mind made him almost cry toward the sky!

However, he had underestimated the disease in the end!

After returning to China earlier, he successively had a fight with Brahma and the crazy Ares, the latter of which involved unsealing. Soon, the Zeng clan came to seek revenge, causing him to kill a quite a number of people. Altogether, he had dealt with problems with violence one after another.

The relationship problems he had with Lin Ruoxi and the other women in addition to the troubles from the Yang clan were all stimulants for his brain.

On usual days, he wasn’t as careful with alcohol as he first returned to China. This time in Paris, he was originally having a vacation, but unfortunately bumped into Depney who had impersonated Apollo, forcing him to fight again. Moreover, he even used Revenant’s Walk to fight the six-winged angels from the Vatican!

Everything that has happened slowly chipped away at his wall of suppression!

Fortunately, he had practised Endless Resolve Restoration Scripture to a high-enough level, allowing him to be in control of his own mind, unlike the past which would put him into a frenzy of bloodlust.

However, Yang Chen wasn’t confident in suppressing his headache next time. He was well aware that if it took place again, it would definitely be more severe than the last time!

Yang Chen suddenly thought of something. He took out a small pill container from his pant pocket.

He felt relieved to have brought the specially made medicine by Jane. Although the effect of the medicine would lessen after each consumption, he still had to use it.

Taking a pill out, he swallowed it immediately before cultivating internal energy to digest it. Soon, he felt that the scarlet in his eyes had faded.

Everyone on the island noticed Yang Chen’s abnormality, but none dared to disturb him. All they did was observe in silence.

Currently, Yang Chen finally raised his head, revealing bitterness. “Don’t look at me like that, and don’t bother asking. I don’t feel like talking about it. Alright, I need to examine Depney’s body now. Let’s return to the cruise now!” 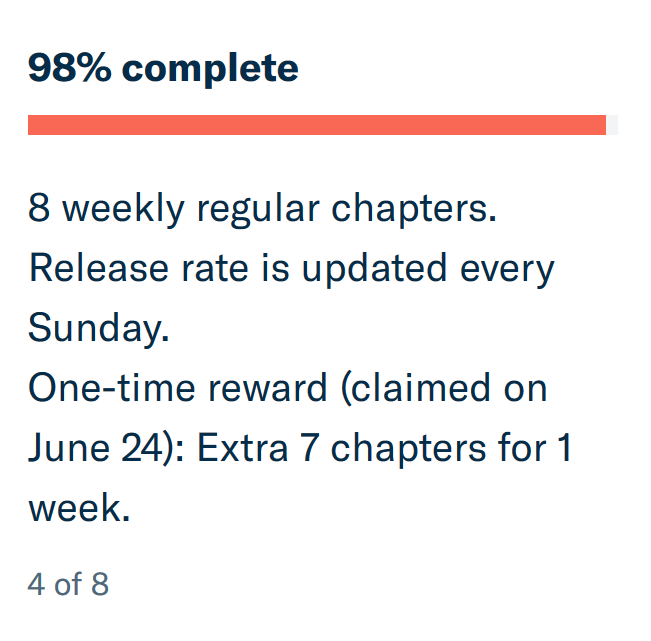