My Wife Is a Beautiful CEO - Chapter 819


Yang Chen grinned in excitement and said, “I knew for a fact that a large school of white-spotted bamboo sharks reside here pretty much all year long. While they aren’t as big as their cousins, the great white shark, they more than compensate for it with numbers.”

Most sharks tend to be pretty docile and keep to themselves until they smell the presence of blood. One whiff of blood is enough to send any shark into a frenzy!

Yang Chen’s laughter continued to unnerve his audience on the other boat. They were already anticipating a gruesome death for Situ Mingze!

The sharks below barred their teeth in anticipation of fresh meat ready for them to devour!

Many of the members from the Red Thorns Society couldn’t help but flee the scene as they started to puke from the sickening thoughts that entered their minds.

Meanwhile, most of the sharks were still feasting on the corpses of the mercenaries and were left uninterested with Situ Mingze’s bleeding leg. Situ Mingze’s heart continued to pound heavily as he watched the sharks swim around him!

“Rose! Rose! My daughter!” Situ Mingze couldn’t help but start screaming. “I’m your father! Are you really going to stand by and watch as I die?!”

Tears streamed down the face of his which was frozen with horror!

Rose stood on the side of the deck with tears forming in her eyes. Her lips curled to form a ghastly smile as she replied, “If it wasn’t for Yang Chen, I would’ve been dead two years ago. I would’ve died by your hands more times than I could remember. When have you ever thought of me as your daughter? You’ve been nothing but cruel to me all these years. I gave you one last chance but you took it for granted. You may be my father, but you are also my worst enemy. He may only be my lover, but he has given me the warmth and love you failed to provide. Having said that, why would I stop him for you?”

Rose shut her eyes and blinked back the oncoming tears.

She didn’t want to stop Yang Chen but she also couldn’t watch him die.

Yang Chen sighed. He thought that Rose would try to persuade him to give her father an easier death, but she was far more resilient than he had expected. Maybe her feelings for her father died the moment he arranged her death.

“Alright, you’ve had your chance,” Yang Chen said nonchalantly. “Why aren’t the sharks eating you? I don’t have all day. Let’s lower you a little more.”

Situ Mingze screamed out of fear but the rope continued to loosen and his legs soon came into contact with the surface of the sea!

The salty water further aggravated the wound and shot a searing pain through his leg and into his body!

Situ Mingze screeched in pain and his eyes widened in shock!

A white-spotted bamboo shark caught a whiff of the blood that was oozing out of Situ Mingze’s leg. Doing a quick one-eighty, it launched itself towards the source and took one big chomp on it!

Situ Mingze’s blood curdling screech shook everyone who was still watching to their very cores!

Watching dead bodies get ripped to shreds was already the peak of what some of the members could stomach. Having a live person torn apart by sharks was more than anyone there could really bear!

Some members even fainted at the sight of Situ Mingze with a chunk of flesh missing!

The shark didn’t tear off the whole foot but instead left part of his flesh still intact, exposing the bone inside.

Even so, Situ Mingze kept alternating between fainting and staying awake because of the pain!

Yang Chen saw that he was successful and lifted Situ Mingze up. “How was it?”

“You… just kill me…” Situ Mingze’s gaze turned blank and his face started to pale from pain and blood loss.

“I’m not done yet. If I don’t get an answer out of you, I’ll start moving up to your calves and then your thighs before going to your body. I’ll make sure that they rip off piece by piece while keeping you conscious enough to witness it happen.”

His words gained looks of horror from the crowd.

They were certain that Yang Chen was a devil sent from hell to torture the living!

Situ Mingze could feel his body being lowered as the blood continued to flow from his leg. A couple more sharks had caught wind of the blood and gathered below him.

Once he reached the bottom, there was no doubt that he was going to experience a whole new world of pain!

Situ Mingze started weeping. Every last ounce of resolve in him dissolved at the sight of the sharks below.

Despite his bold claims in the beginning, he was still an ordinary man. He wasn’t a god or a cultivator. He wasn’t even trained by the military to resist pain.

When fear overtook his viciousness, he could no longer just wait and scream!

Yang Chen pulled him away from the sharks and grinned while saying, “I’m listening.”

Situ Mingze wailed and asked, “Would… you kill me if I told you who the person was?”

“You have no right to bargain,” Yang Chen replied coldly. “The way I see it, you have two options. Tell me who helped you or die screaming. Also, don’t bother lying to me. I can assure you that there are fates worse than this one.”

Situ Mingze gulped as his eyes flooded with despair and helplessness as he turned his head to the boat opposite him.

The members left standing looked towards each other and realized that the accomplice was amongst them!

Rose opened her eyes at the same time, her eyes filled with mixed feelings as she glanced towards Situ Mingze, waiting for an answer.

Before he could finish his sentence, Chen Rong who was standing behind Rose had wrapped one hand around Rose’s neck and pointed a handgun to her temple!

Her deafening voice broke the silence, exposing the identity of the accomplice!

“You were the traitor all along?!”

The members were furious but they didn’t dare to move with Rose being her hostage. One wrong move would result in the blood of their leader splattered all over the deck.

Although she was being held hostage, Rose’s face was calm but her eyes were filled with sorrow.

Yang Chen stared at Chen Rong coldly from the other side. He had expected this all along but needed confirmation before taking action.

“You dumb old man! You deserve to be eaten alive by sharks! You wasted my money by hiring those mercenaries!”

Chen Rong’s face was masked with rage. Her delicate face contorted to one of rage, like a beast begging to be free from its cage.

Situ Mingze seemed to have lost the strength to talk. He was slipping in and out of consciousness as more and more blood started to spill from his legs.

“You thought you could save yourself by doing this?” Yang Chen asked faintly.

Chen Rong ground her teeth. “I failed. I was planning to have Situ Mingze fool the former members of the West Union Society, then have the Swedish mercenary group get rid of the rest of you. But, I underestimated you. I never thought you could survive that bomb. I knew that there was a chance of me being exposed when you wanted to leave for international waters. But how could I have predicted that we would end up like this?”

Yang Chen chuckled. “I remember telling you to not pull something like this again else you face the consequences. I won’t let you go so easily despite my relationship with your brother. Let it be known that I, Yang Chen am a man of my word. Today, I shall deliver you a fate far worse than hell.” 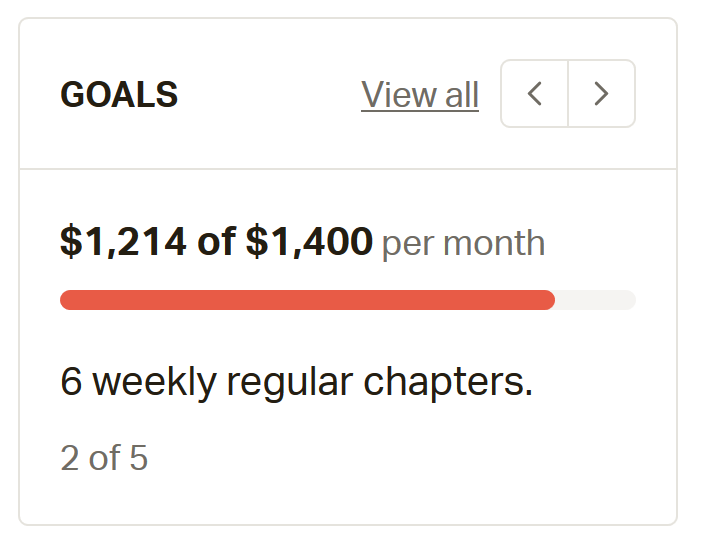 Our translation rate is supposed to be only 5c/week now. But if it increases to $1,400 by Sunday, there'll be 7 chapters next week as well!

Support us for this translation project. Become a patron now!