When the game entered the hero selection interface, He Yu didn’t rush to pick a hero. In ranked, he often picked Genghis Khan to farm, go to the bottom lane, or avoid some extreme situations. In Abyss Fighting Mode, the game would randomly pick a hero for you to play. If you wanted to switch, you’d have to spend diamonds, and unfortunately, He Yu was rather low on diamonds at the moment. He Yu had a new account, he didn’t have a lot of diamonds to start with, but the issue of being unable to choose your hero wasn’t overbearing as He Yu also enjoyed trying out different heroes in that mode.

He Yu was very self-aware. With his current situation—decent awareness but relatively unskilled mechanics—playing support was no doubt the most beneficial to his teammates. So, in the end, the hero he chose would be decided based on the needs of the team.

He Yu was carefully deciding on his hero, but his two temporary teammates had already insta-locked their heroes within second of entering the selection interface[1]. Lee Si Jie chose a mage, Zhuge Liang, while Zhao Jin Ran chose an assassin, Ake. For a short moment, He Yu felt as though he was playing in a Bronze ranked game. Insta-locking was something that only beginners do.

After seeing the choices made by the two of them, He Yu was taken aback for a moment and stared at Gao Ge. He clearly remembered that Gao Ge and Zhou Mo’s positions were solo-mid lane and solo top lane, respectively. But at this moment, Lee Si Jie's Zhuge Liang had already occupied the mid lane, so what should Gao Ge pick!?

"I'll play support," Gao Ge told He Yu when she noticed him staring.

"What about me?" He Yu questioned.

"Wahh! " Before He Yu spoke back, Lee Si Jie and Zhao Jin Ran both surprisingly yelled obnoxiously. "Genghis Khan, you sure?!"

Both of them seemed to have a bit of game knowledge, knowing that Genghis Khan required more skill to play compared to other heroes. Seeing that a Platinum ranked player, He Yu, was making such a bold move to play this hero, both of them were not amused at all.

"You will know the answer after playing this match," Gao Ge whispered, and chose the hero she wanted to use, Zhang Fei.

Zhang Fei was a tanky support with strong defensive capabilities, and his ability to protect his teammates was outstanding. The hero that Gao Ge picked clearly showed that her goal was to protect He Yu’s Genghis Khan. Lee Si Jie and Zhao Jin Ran both pouted in disapproval. Then, Zhou Mo also chose the hero he planned to use, Liu Bang.

Liu Bang was also another tanky hero, with the capability to stun enemies. On top of that, his ultimate skill, Battlefield Command, allowed him to teleport anywhere on the map in 2.2 seconds. This allowed Liu Bang to be able to assist anywhere on the whole map.

Gao Ge and Zhou Mo's choice of heroes did not seem to be picked carelessly. While He Yu was thinking about the strategy they were going to pull out, Lee Si Jie's phone suddenly rang.

Less Si Jie hung up the phone and seize Zaho Jin Ran with excitement. "The boss invited Meng Jie to join them in the dormitory sorority, let’s hurry! "

"Let’s hurry up then!" Zhao Jin Ran was immediately excited after listening to this offer and slid his phone back into his pocket.

"Hey, you two!" Zhou Mo, who had been in a good mood, was visibly pissed off.

These two seemed to lack any moral conscious and smiled without any trace of embarrassment. "Oh no, there’s something that we need to do today, so what about next time? Let’s play on another date."

"Next time?! The school league will start in a few days!" Zhou Mo said angrily.

Zhao Jin Ran exasperatedly replied, "That doesn't matter, you clearly know how good our skills are. We’re better than people who are Platinum ranked, right? You guys should train him well."

"He Yu's skills are better than any Platinum ranked!" Zhou Mo rebuked.

"Are they? We are going to rely on you then, thank you!" Zhao Jin Ran was hardly paying attention and was already leaving.

"See you in the school league.” Lee Si Jie followed Zhao Jin Ran, and it looked as though the team practice had been canceled.

By then, the game had already began loading and both Ye Mo Shen and Qing Qi Zhou were unable to load into the game. After being forced into the game by the system, it was immediately followed up by prompts that showed their two teammates had left the game.

He Yu stared at Zhou Mo, then Gao Ge.

Zhou Mo's expression was full of indignation, while on the other hand, Gao Ge, who usually had a fierce temper, didn’t show any expression.

"How are we going to play this?" Zhou Mo muttered.

The three heroes set off and each went into their own lane. Gao Ge’s Zhang Fei gave up being a support and turned to the mid lane. The system asked them whether they would like bots to play for their offline teammate, but the three of them ignore the option. It didn’t take long before the opposing team noticed that there were tow missing players and got together to push mid. The three of them fought hard but did not seem to have a chance to fight back. They hadn’t even been able to wait until the six-minute mark when the surrender button would become available.

The mood in the room had visibly soured, and Zhou Mo looked depressed while Gao Ge stayed expressionless. After instinctively checking the game data, He Yu could not help but ask the question he wanted to ask immediately.

"You just said that my skills don’t belong to the Platinum rank. Then what do you think I should be?" He Yu asked.

"Ah?" Zhou Mo, caught off guard, paused for a moment.

Instead, Gao Ge answered in his place and said, "If you play as a marksman, you belong to Platinum. But if you play a hero that’s easier and can recover from mistakes, I don't think it would be a problem for you to hit Diamond.”

"For jungle, it depends on the hero. Some might need a lot of skills, for instance, Luna, Baili Xuance, and others. I’d predict you wouldn’t even be able to reach Platinum rank. But for some relatively simple heroes like Prince of Lanling and Nakoruru that slay enemies with a single set of skills, you might be able to reach Platinum and even Diamond after familiarizing yourself with those heroes," Gao Ge explained.

"That makes sense." He Yu continued to nod. He also understood the game. After listening to Gao Ge, he naturally had his own analysis and judgment.

"It's the same for playing solo mid lane. If it's more of a skill-based hero, like Diao Chan or Zhuge Liang, you don't stand a chance. Playing long-ranged heroes might be better than using warriors and junglers. For instance, Ying Zheng. I think that if you use him, you could be able to reach Elite rank.”

"Ying Zheng?" He Yu thought about the hero and agreed with her judgment.

"It seems that you also know that playing support is the most appropriate role for you," Gao Ge laughed.

"But the problem with support is that there is no way to carry out the rhythm alone, so most of the time it still depends on teammates. But, a good support is always able to improve the team's chance of winning. So I think that if you play support, you may reach King rank. As for how many Stars you can get from there, I’m not too sure. After all, I’m still a beginner at this.” Gao Ge said.

"Well then, should I play a support role in the following games?" He Yu asked excitedly. He had no particular preference for what role he played. Genghis Khan had been solely for practice, but for the tournament, he hoped he could play the hero that contributed the most to the team.

Gao Ge shook her head and said, "No, stick to marksman."

"Ah? Then why? Wouldn't it be better for me to play support?" He Yu asked.

"Because we don’t have anybody to play marksman." Gao Ge said. 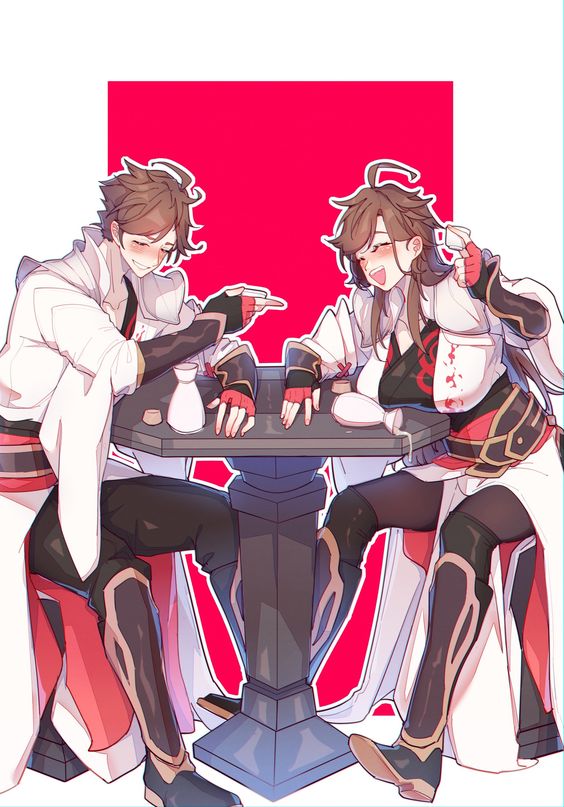 Gender swap Libai is hawt too!

*Insta-lock: Instantly lock. It’s basically when you select your champion instantly right when you jump into hero selection. Can be a bit annoying to your teammates if you steal their role.