"Be careful." As Genghis Khan resurrected, Gao Ge reminded He Yu of danger. At the moment, both the opposing jungler and support weren't visible on the minimap. There was a possibility that they were preparing to gank Genghis Khan at the bottom lane.

"Maybe she went for the blue buff? "He Yu guessed. Athena's damage came from the burst damage of her skills, resulting in fast mana depletion.
The shorter the skill cooldown, the better for Athena, which made her extremely dependent on the blue buff. At the beginning of the match, Schrodinger's Cat took his team's red buff and rushed to He Yu's jungle area to steal another red buff without bothering to pick up a blue buff.

Athena's mana must have been low. At the thought of this, He Yu trembled slightly. The last time Athena used her mana was the time when she killed Genghis Khan; how much mana she had during that time?

He Yu did not pay attention to this detail, but because of his habit of watching KPL for many years, he could vaguely remember the scene. After Athena killed his Genghis Khan, she seemed to have a decent amount of mana left. She would have enough to gank Genghis Khan.

He Yu didn't continue to wrack himself with doubts. The reason why he chose Genghis Khan to practice using this hero's Eagle Eye skill, which granted vision. Practicing with it would increase his awareness throughout the game. When Genghis Khan walked out of the fountain, he cast his eagle to fly directly to the opposite's blue area. As the eagle gave the vision to the whole team, they realized the blue sentinel was still alive in his nest.

Excited by the alive blue sentinel, Dharma pinged the team to steal the buff together. As a jungler whose own jungle area had been emptied, it was quite embarrassing not to be able to do anything, so discovering the opponent's blue sentinel, alive, was terrific news for him.

"Okay," He Yu's Genghis Khan did not head towards the bottom lane, and instead, turned to gather with his teammates. This could avoid the ambush from the other team, and if Dharma attacked the blue area successfully, it could be a massive turnover for He Yu and his team.

There was nothing wrong with the idea, but He Yu felt something fishy. This was a high-ranked match; everyone knew that their objective was to push the turrets, not take kills. Was it necessary for Athena to ambush him right now? Even if Athena managed to kill He Yu again, she would have exhausted all her mana. Then what? She'd have to recall to replenish her mana or use basic attacks to kill the blue sentinel slowly. Either way was time-consuming, and Athena's momentum would be impaired; it wouldn't be a wise choice on her part!

The blue buff! The most important thing for Athena to do right now was to get the blue buff as soon as possible; this would give Athena a substantial lead to win the game! It seemed that Schrodinger's Cat didn't understand what they should be doing right now.

This was also one of the habits of He Yu from watching KPL. Now that he started playing in the match himself, he still had the audacity to feel sorry for his opponent.
He dragged his screen and took a look at the middle lane, Zhang Liang retreated under the tower while Dharma rushed towards the enemy’s blue area with cheerful steps. Even the bushes beside the river could feel his cheerfulness and swayed gently.

The suspicion in He Yu's heart had not yet seceded, and he continued to pay attention to Dharma. A circle of blue aura encircled Dharma after he killed off blue sentinel.

His blue buff is almost finished!!!

"The bushes! "He Yu suddenly cried out. The bushes swayed, and Athena rushed out from them.

Athena's spear was readied and immediately flew towards Dharma! Dharma wasn't slow to react; he attempted to casted his skill, Mantra - Formlessness on her, but unfortunately, another figure appeared beside Athena.  It was Guiguzi with his first skill activated, and he cast his second skill, The Animist. Before Dharma could even react, he was pulled and stunned by Guiguzi, giving Athena a chance to strike Dharma with her Unstoppable Spear.

Gao Ge's Zhang Fei was one step behind Dharma, and because of this, Zhang Fei managed to avoid Guiguzi's stun. She used her second skill to add a shield to Dharma, followed by her first skill, Forbidden Domain, to try knocking away Athena and Guiguzi.

As a result, Guiguzi was knocked back while Athena used her first skill, Holy Advance, to dash towards their middle turret.

Dharma finally recovered from Guiguzi's stun and angrily used his skill, which he had not been able to use just now. But suddenly, Athena rushed in front of Dharma again; Holy Advance reduced her cooldown of Unstoppable Spear, so she was able to use the skill again. She dashed to the side, dodging Dharma's crowd control skill.

Although Dharma's skill, Mantra- Formlessness, missed, he continued to use his second skill, Mantra - Enlightenment, resulting in Dharma punching the air for five times.

Upon attacking the target three times, Athena would trigger her passive, Unstoppable Spear. The passive caused Athena to attack the enemy hero in three consecutive blows, dealing 25% of the target's health as damage!

Dharma wasn't a squishy hero; with each spell cast, his defence increased. But, he had suffered a lot of damage when Athena had hit him. In addition, he was still under the effect of Guiguzi's first skill, Prophecy- Hidden Land, which reduced Dharma’s magic and physical defense by 25%.

Dharma's mantra defence and Zhang Fei's shield had already absorbed substantial amounts of damage and could no longer protect him. Athena's spear swiftly swung and pierced Dharma into the ground.

Low mana! Athena had exhausted her mana by killing Dharma, but the blue buff on Dharma had transferred to her the moment she killed him. The buff rapidly recovered her missing mana, and she stood proudly in the middle lane.

Diao Chan, who originally planned to rush out from the turret to support her teammate, decisively cast his second skill and dashed back towards the turret again. 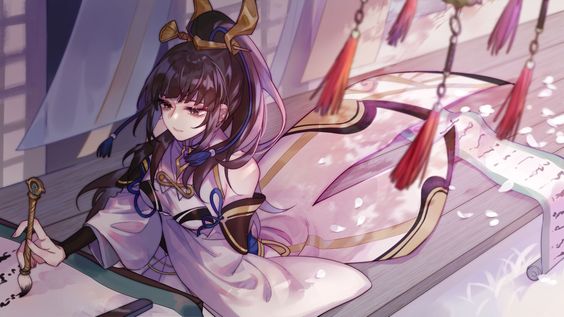 Studious Llokings anime girls are also must have ;p