He’d shrunk, so naturally, he couldn’t see people. He’d shrunk, so his perspectives were all different. Everything looked unfamiliar, so he didn’t notice it at first.

Why did he shrink?

He wanted to know the answer too. He thought hard about his experiment. What went wrong? Why was he small?

Despite everything, Ye Lang didn’t panic. He was still calm as always because he was used to accidents like that.

It wasn’t even the first time, nothing to be afraid of here.

You should know that Ye Lang once turned someone into a rabbit. Oh, right, that was the Zhen Xiaoyan incident. That was his first accidental product ever.

In this field, even if you have a hundred percent confidence, accidents still happen. This was understood!

Since they were accidents, some effects could only be produced once. They didn’t happen a second time because no one can remember what contributed to an accident clearly enough to recreate the effect.

Like this time. Ye Lang shrank probably because of one of the mechanisms in forging gold. There was already a size-changing effect in the process, but it was meant to target inanimate objects. Since it was a very unstable reaction, it often destroyed the object in mention.

Ye Lang thought of many ideas, but he never could get the results he wanted!

Once Ye Lang understood he’d shrunk, he leapt onto his workbench. He was lucky to have a base in martial arts or getting to the top would’ve taken forever.

And that was how, in Laboratory 2, the little man leapt from object to object on the workbench. If a few girls were to see him right now, they’d definitely think he was adorable. He probably could get a few girls like that.

However, if Coldblood Thirteen were to see him, he’d immediately throw Ye Lang into a cage and punish him for messing up his laboratory.

As for how Coldblood Five would treat him, we’d find out very soon.

“Frank! Are you in there?” Coldblood Five opened the lab door, calling for Ye Lang.

“??” Coldblood Five heard Ye Lang’s voice but couldn’t see him. The tiny man was hard to see with the naked eye, and nobody would think to look for a man that small anyway.

“Where are you? Are you playing hide-and-seek?” Coldblood Five asked coldly, seemingly upset. She didn’t like playing meaningless games with other people. This included Ye Lang, of course, he didn’t have special rights.

“...” Coldblood Five finally found him, the tiny Ye Lang on the table. He sat cross-legged with a bitter expression.

Coldblood Five rubbed her eyes. After making sure she wasn’t mistaken, she approached. She peered at Ye Lang, her gaze still cold as ever, expressionless.

Then, she lifted a finger. She flicked gently….

“Oh fuck! Little Five, what the fuck are you doing!!” he roared in anger. Ye Lang was thrown far away, tumbling a distance before he finally stopped.

Coldblood Five ignored him, looking at Ye Lang without expression. Then, she picked him up in the air with two fingers.

“Put me down! What are you doing?! Don’t cause trouble now, I’m thinking of a way to recover!!” Ye Lang struggled, screaming and shouting at Coldblood Five.

Coldblood Five didn’t respond. After a long while, she finally remarked flatly, “It’s good you’re like this.”

“....Good?! Let’s shrink you, then you won’t feel that way. I’ll say it again, put me down now!!” Ye Lang grabbed Coldblood Five’s dainty finger, then kicked a few times.

“You still can talk. Alright, let’s continue!” Coldblood Five didn’t care about his size, only about what he taught her.

“Hmmph, well I’m not in the mood to talk to you. I want to get big,” Ye Lang crossed his arms, upset. He was absolutely adorable.

“You will remain like this, I like it!” Coldblood Five replied. She was an assassin, and also a girl. She could still be swayed by cute things- only her standard was higher.

Looking at Ye Lang’s situation, Coldblood Five wanted so much to hug and kiss him! However, she was still Coldblood Five after all, so she had to resist!!

“... You may like it, but I don't!! There, there Little Five, I’ll teach you more when I get bigger. Help me recover now, your help will make it more convenient,” Ye Lang started to coax Coldblood Five. He couldn’t care less if she was Coldblood Five. Girls should be comforted like that, according to Ye Lanyu.

He needed Coldblood Five’s help to grab stuff. His size made it very inconvenient to get anything. If it weren’t for it, his progress would be much faster.

“You’re coaxing me?” blurted Coldblood Five because no one ever coaxed her like that.

Regular folks would definitely deny coaxing her, covering with an alibi. Ye Lang was different though. He just nodded.

Ye Lang took this as an opportunity to leave the devil’s palm. He stood, arrogantly looking at Coldblood Five. You’ve seen what I can do now. Let’s see if you’ll pick me up again.

“You little shit, you bit me!” Coldblood Five exclaimed, mildly annoyed. She extended her arm to catch Ye Lang, wanting to punish him.

Ye Lang may have shrunk, but he still had his skills. He dodged her, then taunted, “Come! Here! Catch me!!”

Unfortunately for her, Ye Lang dodged her just as effortlessly. He continued his taunts with stupid faces.

I don’t believe I can’t catch you!

Coldblood Five spaced out for a moment, then immediately increased the speed of both of her arms to catch Ye Lang. She spaced out because she didn’t anticipate Ye Lang’s agility.

She was even more surprised to find that, even when she’d increased her speed, Ye Lang seemed to still dodge her. Was Frank really that much of a master? No, that’s impossible!

He was probably that fast because he’d shrunk. And she wasn’t used to catching tiny humans like this!

Looking at his foolish demeanour, Coldblood Five refused to believe that he was a master!

MC became tiny. am thinking tiny humans can ride on my fur. i can then bring friends to my favourite tree to pee.

bork. am very panic if shrink. might get stepped on. 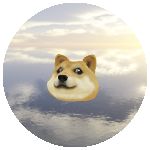 Support DOGE and his work The Silly Alchemist